I’m all about the napkin fold cards now!

I showed you last week the one I made for a card swap I did:

Well, I have a few more to show you today.

This is one that I made as a birthday card for a friend of mine:

I decided to use some of the many black and gold themed paper and dies that I have in my stash to make a nice, classy looking card.

Rather than leave space for writing on the inside, I decorated it with a mini envelope and a happy birthday die cut image as I was giving her gift cards. Sometimes gift cards can be tricky to give because they’re so small but you still want to give something that looks impressive. I think the napkin fold card is a great way of presenting a gift card. As I had decorated the inside, I left the back of the card blank and just wrote the message there instead.

So these napkin fold cards are pretty useful. But wait, there’s still more!

While playing with the card and trying to get it to fold the right way, I discovered that you can sort of fold it into the shape of a box! With the addition of four paper clips to help keep two of the side up, a card turns into a pretty handy fold flat box: 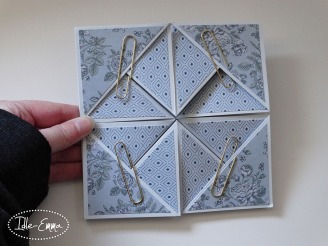 It’s quite useful for being able to throw some bits and bobs into and when you’re finished, you can fold it back flat, store it away and then when you need to, send the card off to someone! 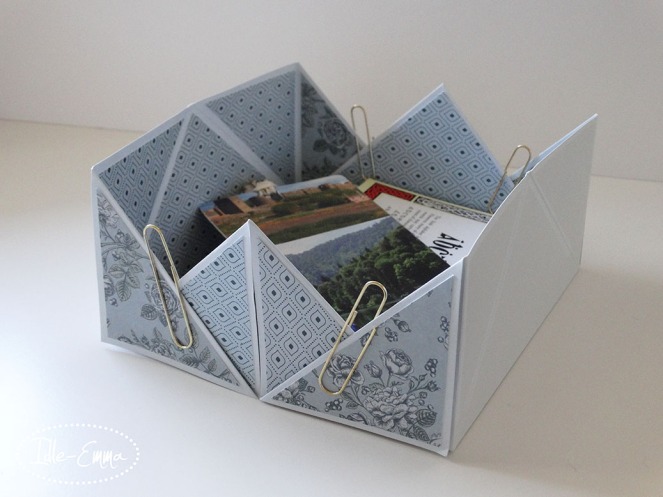 I’ve been using this one quite a bit to hold either snail mail or planner supplies when I decide to write letters or plan in a different room than usual.

So I hope I’ve persuaded you all now to go off and make some napkin fold cards! If you’re curious about how to make one, here’s a link to video on how to that I found useful! They’re really quite quick and easy to make but the folding does look impressive!

To card makers out there, do you have a particular style of card that you like making?

27 thoughts on “Napkin Fold Cards (with other uses too!)”