Hey everyone, how’s it going?

Does Friday count as the start of the weekend? Some people count Friday and some people don’t. Well, regardless, I hope your weekend goes well and you have fun.

This week was my moms birthday so of course it was down to me to get crafty and make something! I didn’t actually end up making a card for her though. Back in March, I participated in a card swap run by Crafty Caroline Creates and in April, I got a card back. I actually forgot to photograph it but it’s really pretty. It’s pink, has butterflies and is for a birthday so it seemed the perfect card to give to my mom.

I can’t just not make something though so instead of making a card, I made a box!

So, this box was inspired by one that Sam from Pootles.co.uk made and it’s a no glue foldable box. I saw the video she made making it and loved the idea of a box with no glue and that’s foldable. The size is also really nice, it’s 6″ x 4″ x 1″.

For Christmas, me and my sisters got our parents plane tickets to Edinburgh and we timed the trip to be close to her birthday (it was just before, they got back to Limerick the day before her birthday). The original plan was to give her money as an early birthday present for her holiday which would be presented in this box but the plan changed. Instead, we gave her an annual pass to the heritage sites in the Shannon region. Luckily, that is a small thing and so the box was still able to be used!

So, for this box, I used some card from the Wild Flower collection by First Edition. I have to say, I love this collection of card! It surprised me. I picked this up from Art&Hobby for €10 when I was up in Dublin and needed to cheer myself up after a tiring aptitude test that I did really badly on. I don’t normally go for bold colours like this pack has, I typically prefer pastel colours, but I really love all the green, blue and purple patterns in this pack and even the pink ones aren’t bad!

I really wanted to use some of the purple card from the pack so I went on a desperate search around my craft room for something to add to it. Eventually, I realised that the Folk Floral die-cut pack from Papermania would do the job nicely. It wasn’t obvious at first because I was focused on the blues from the die-cut image but then I figured that I didn’t have to use those parts. The great thing about layering decoupage images is that you don’t have to use all the layers and you don’t even have to use them in the recommending order!

Flower decoupage images are particularly great for that because instead of layering the flower images on top of each other, you can put them next to each other for a fuller cluster! Here’s a close up of the top of the box: 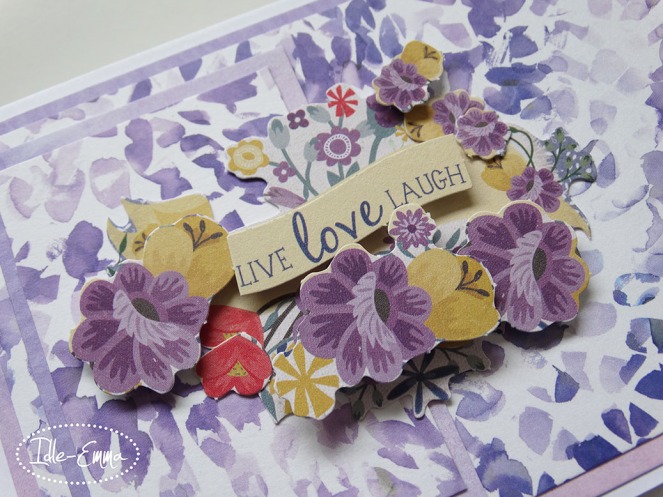 I laid some images flat and popped some up. The yellow looks really nice against the purple and the purple itself matches the box fairly well, it’s not too saturated with colour.

As I said near the start of this box, this was inspired by a no glue fold flat box.

For some reason though, I did decide to glue the box so it no longer folds flat.

Still don’t know why I did that!

But the box still looks lovely and I really do adore the card pack. I did choose the more subdued patterns for this box but using the rest of the pack, it’ll be a nice change to play with such bold colours – get’s me a bit out of my comfort zone!

What styles get you out of your crafting comfort zone?

8 thoughts on “A Box for a Birthday Gift”

An order that was sent out the other day - so satisfying seeing these colourful minis bundled up!
Set of high twist sock minis up in shop!
An order heading off in the post today!
A finished #stormshawl made using one skein of my After Dusk colourway in 4ply (yarn still available in my shop!). A beautiful pattern and I think the yarn suits it very well!

My current read: We are the Dead by Mike Shackle, a very dark fantasy about what happens when the war is lost.
And the last week of my February bujo pages! Photographed here with my 2020 Hook and Light blanket as a backdrop because the colours went so nicely with my spread...maybe I need to coordinate my crochet and planner more 😂
And some more February pages I meant to post earlier this month! This is my February title page which was just me drawing things I like.
Forgot I took pictures of my February bujo spreads to post earlier this, really should get them up before the end of the month!
I thought that crochet, knitting, weaving, spinning, reading and playing video games just weren't enough hobbies so I'm going to try add painting miniatures to the list 😂
Meant to post this picture the other day when the box arrived but I was a bit out of sorts (you'll know why if you my story on Monday) so here it is now, my second @novelideasbooks subscription box!
A Christmas present from my parents arrived the other day - belated but no less appreciated. It's an @elrohirleather traveller's journal that has been on my wishlist for years! So happy to finally have one of these 😍 I live just how many notebooks I'm able to fit into this thing!
Another week from my bujo 💡